I've been on dialysis now for about a year and a half. Maybe a bit longer. Certainly longer if you count the time it took me to learn to spell the damned word. And when I first started I told people - with my usual upbeat attitude - "I look at it like this... I have to spend 4 hours a day, 3x a week, reclinin' in a comfy chair with heat and massage... my own TV... a warm blanket... WIFI if I want to bring my tablet or laptop... small snacks... pretty nurses (for the most part, lol)... rides to and from the appointments...

Geez, if I were still a teenager this would be my DREAM part-time job! How bad can it be?

Sigh. Like ANY "dream" job, there are "hiddens". As the Chinese proverb says, "Beware the Teeth Behind the Smile".

A fellow at my clinic recently "celebrated" his 30 YEARS of coming and going there 3x a week. At first I thought, yeah, that's a lot... but no big deal. As I looked at it (above)... a walk in the park. A dream job.

Until you factor in the boredom. The same f*ckin' TV shows, over and over and over, every week. The relentless news stories attempting to make us live in fear (we're on dialysis - like we give a crap about catching ebola), hour after hour. The same nurses telling you M&M's and bananas and Ben&Jerry's are a no-no. Your proteins are too low, your phosphours are too high and your girlfriend is probably screwing a circus clown while you're here because she knows you have to BE here.

And I've been coming less than two years. I feel like I'm being converted to Catholocism... or Jew-ism... or one of those guilt-ism religions. "I'll have some Wheat Thins with a dollop of Guilt, please".

I started bringing hot soup in a thermos with me last week. My nurse saw this and raised an eyebrow. Well, all three, actually. She has one of those eyebrows that goes all the way across, like a caterpillar before it turns into a butterfly. And I swear it was pulsating like some furry lava creature from an old Star Trek episode, reaching out to claim territory from ear-to-ear...

"Look, you wanna write me tickets for non-compliance and stick me in the Hole, fine. But I've just been denied my first shot at a transplant and I'm not gonna die starving waiting for the next one."

The "Hole" is the room every dialysis clinic seems to have that's isolated from the rest of the floor. It's the room for Forgotten Patients.

I looked at her, raised the fist of my non-needled arm and screamed "Your Fire-Drill movies don't scare me! I'm eating my soup, my M&M's and my crackers. Go Ahead - put me in the hole! I LIKE IT THERE!". HAHAHA!!! (Maniacal laughter)...

I think that's what I said before my BP dropped to 75 and I told them I needed to be wheeled into the bathroom before I crapped my pants.

I'm sorry, but despite my formerly positive outlook on dialysis... it SUCKS.

If I (or WE) could just get up and move around a LITTLE bit. Play Monopoly or Poker. How much time can you really pass talking on a cellphone? (OK, for some people - a LOT) - it would help tremendously. But no, we have to remain pretty much immobile. Like Luke Skywalker encased in Carbonite.

Sometimes it seems nurses have lost their empathy for the patient on dialysis. Once that chair is free, it's rush hour. Either to get you in or get you out, it's rush hour. Then, for them, once you're in and connected or done and disconnected, it's break-time. All they have to do is press a button to silence the occasional beep-beep when the alarms go off warning them of the blockage to and from your brain. Like they care. It's interrupting their break and time they have to watch funny YouTube videos..

Meanwhile, you squirm in your chair as your bladder and bowels wonder how much longer before they explode on the spot... knowing the nurse will just ask you if "you still have to go?" after they play on the computer entering your info for ten minutes first.

You suppress your desire to clamp and cut your lines with the toenail clippers you brought from home this morning for just such an occasion and make a mad dash for the bathroom, hoping a sadistic nurse hasn't already locked it shut. And when you return from your journey, you quietly and sheepishly say "Thank You" as if your nurse saved you from certain electrocution or hanging.

So, write me tickets for non-compliance. Stick me in the Hole. I'm still gonna watch Bruce Willis movies, eat Progresso Soup, suck on M&M's and load up on Triscuits and spray-cheese and enjoy my trip to the grave the ENTIRE freakin' way, thankyouverymuch.

All religions, even Buddhist, say that suffering is part of life. I prefer to believe that the Gods have offered us alternatives.

And to that I raise my spoon and proclaim: High phosphours be damned. Bring on the Ben&Jerry's Phish Food! 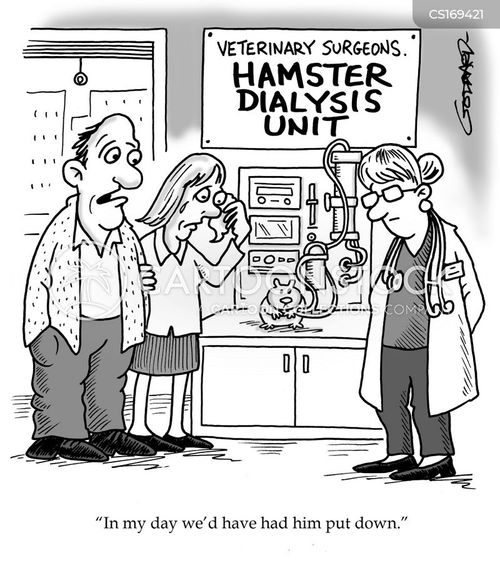 Don't forget to cast your vote at top of post!
-DF

It like Cancer, there are different treatments for that, but a lot don't like it, going back and forth for as long as they are require, but some Cancer are easy to deal with and some aren't. Some don't like the treatments that they are going through.... like the movie "Bucket list".

I guess it depends on how bad you want to live fishy?

by 51andready » 09.12.2014, 11:52
You really cheered me up tonight. Love your humor. I also am sick but nobody knows why. I just can't breath. So I have to haul a tank of oxygen around with me everywhere. So I gotta hose in my nose. Not such an attractive thing. I go out to eat or shop and people look at me like I might fall over anytime. I kind of like to see them squirm a bit.

51andready wrote: You really cheered me up tonight. Love your humor. I also am sick but nobody knows why. I just can't breath. So I have to haul a tank of oxygen around with me everywhere. So I gotta hose in my nose. Not such an attractive thing. I go out to eat or shop and people look at me like I might fall over anytime. I kind of like to see them squirm a bit.

Sorry to hear that, but when I see someone like you, I don't stare at them as I don't like to be stared at either when I am talking to my deaf friends in public places. It is an uncomfortable feeling for sure.

by Buttnzz » 01.01.2019, 10:19
Although this is an old post, I too can relate to your spot-on observations and experience with this mandatory medical process, if we want to live. I am new to the process, about a month now; spent 18+ days in the hospital and then rehab. Now attending the 3x a week requirement. After spending New Years Eve there I was feeling pretty low, sad and lonely. Read you post and it really cheer me up, in an odd sort of way. Keep the faith and hopefully we will meet a match and be able to retire from this necessary merry-go-round.
-Buttnzz

by scrummy » 08.01.2019, 0:52
Fish was one of the most warmest PPL ever on 50+,
We spoke many times on fone, when he was able to and for a while
after he got very sick, He troubled no one and yet cared for everyone,After his passing, his family said that Over 50 played a big part in his life,
Because of all the friendship and laughter most of which he instigated.
Hugs Fish,

Dialysis is interesting Cerberus97 ?? Fish was a dear man...

Dialysis is interesting Cerberus97 ?? Fish was a dear man...

He was indeed blackwidow and would do anything to help anyone, particularly with technology matters in which he was expert. His input in the forums is missed.
Post a reply
Previous Next
Return to Health